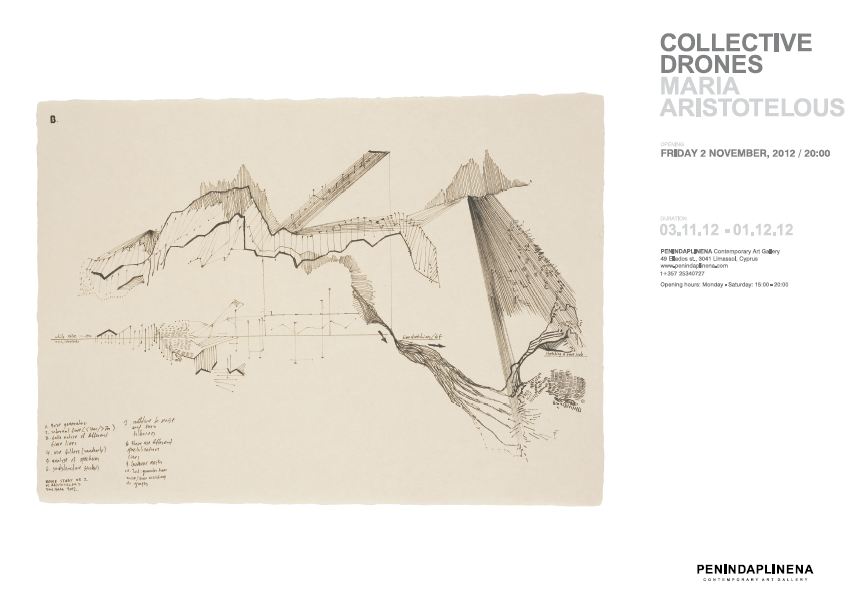 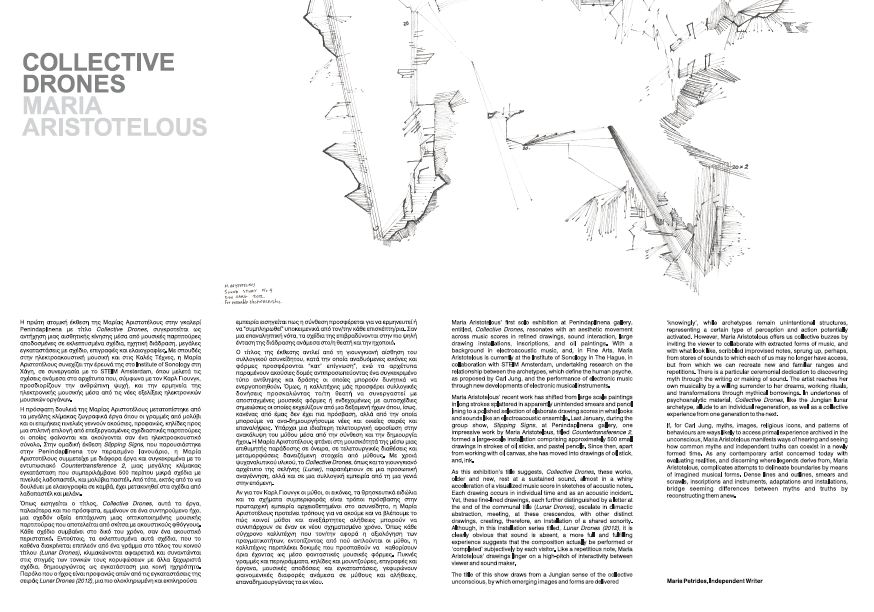 Exhibition dates: 2 November 2012 – 2 December 2012
Opening hours: Tuesday – Saturday: 15:00 – 20:00
penindaplinena gallery limassol
49 Ellados, 3041 Limassol, Cyprus
25 340727
Maria Aristotelous’ first solo exhibition at Penindaplinena gallery, entitled, Collective Drones, resonates with an aesthetic movement across music scores in refined drawings, sound interaction, large drawing installations, inscriptions, and oil paintings. With a background in electroacoustic music, and, in Fine Arts, Maria Aristotelous is currently at the Institute of Sonology in The Hague, in collaboration with STEIM Amsterdam, undertaking research on the relationship between the archetypes, which define the human psyche, as proposed by Carl Jung, and the performance of electronic music through new developments of electronic musical instruments.

Maria Aristotelous’ recent work has shifted from large scale paintings in long strokes splattered in apparently unintended smears and pencil lining to a polished selection of elaborate drawing scores in what looks and sounds like an electroacoustic ensemble. Last January, during the group show, Slipping Signs, at Penindaplinena gallery, one impressive work by Maria Aristotelous, titled Countertransference 2, formed a large-scale installation comprising approximately 500 small drawings in strokes of oil sticks, and pastel pencils. Since then, apart from working with oil canvas, she has moved into drawings of oil stick, and, ink.

As this exhibition’s title suggests, Collective Drones, these works, older and new, rest at a sustained sound, almost in a whiny acceleration of a visualized music score in sketches of acoustic notes. Each drawing occurs in individual time and as an acoustic incident. Yet, these fine-lined drawings, each further distinguished by a letter at the end of the communal title (Lunar Drones), escalate in climactic abstraction, meeting, at these crescendos, with other distinct drawings, creating, therefore, an installation of a shared sonority. Although, in this installation series titled, Lunar Drones (2012), it is clearly obvious that sound is absent, a more full and fulfilling experience suggests that the composition actually be performed or ‘completed’ subjectively by each visitor. Like a repetitious note, Maria Aristotelous’ drawings linger on a high-pitch of interactivity between viewer and sound maker.

The title of this show draws from a Jungian sense of the collective unconscious, by which emerging images and forms are delivered ‘knowingly’, while archetypes remain unintentional structures, representing a certain type of perception and action potentially activated. However, Maria Aristotelous offers us collective buzzes by inviting the viewer to collaborate with extracted forms of music, and with what look like, scribbled improvised notes, sprung up, perhaps, from a stores of sounds to which each of us may no longer have access, but from which we can recreate new and familiar ranges and repetitions. There is a particular ceremonial dedication to discovering myth through the writing or making of sound. The artist reaches her own musicality by a willing surrender to her dreams, working rituals, and transformations through mythical borrowings. In undertones of psychoanalytic material, Collective Drones, like the Jungian lunar archetype, allude to an individual regeneration, as well as a collective experience from one generation to the next.

If, for Carl Jung, myths, images, religious icons, and patterns of behaviours are ways likely to access primal experience archived in the unconscious, Maria Aristotelous manifests ways of hearing and seeing how common myths and independent truths can coexist in a newly formed time. As any contemporary artist concerned today with evaluating realities, and discerning where legends derive from, Maria Aristotelous, complicates attempts to delineate boundaries by means of imagined musical forms. Dense lines and outlines, smears and scrawls, inscriptions and instruments, adaptations and installations, bridge seeming differences between myths and truths by reconstructing them anew. 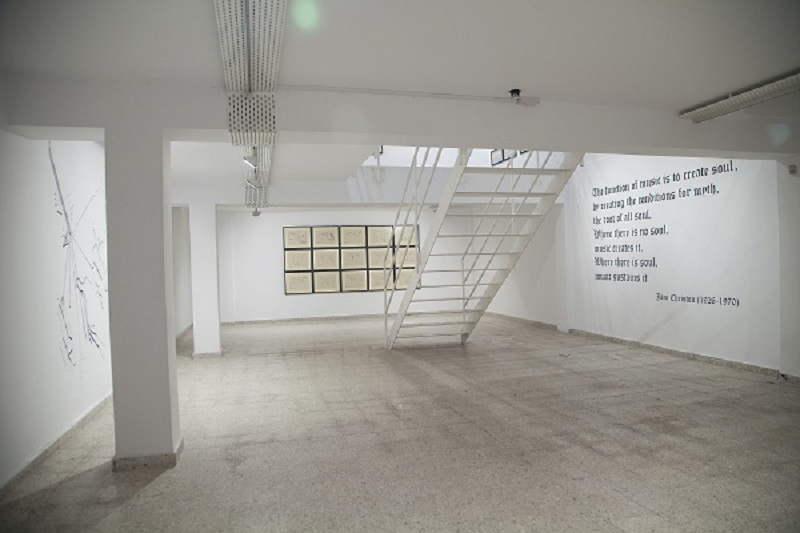 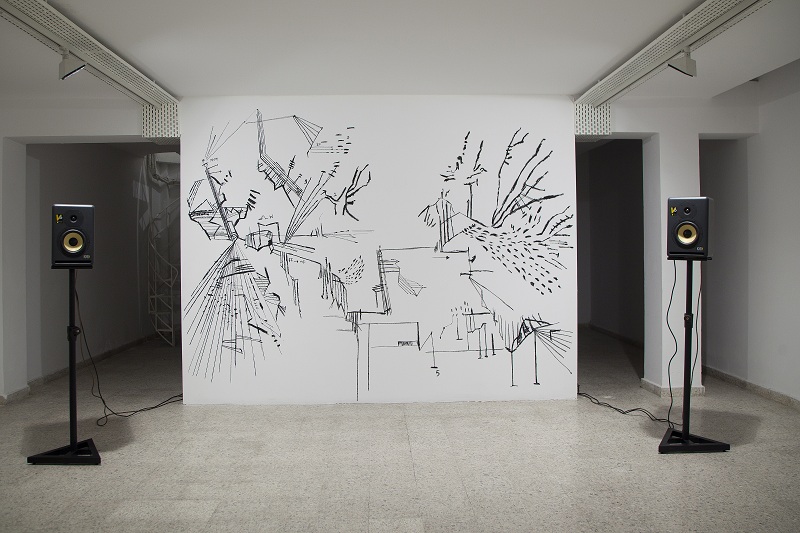 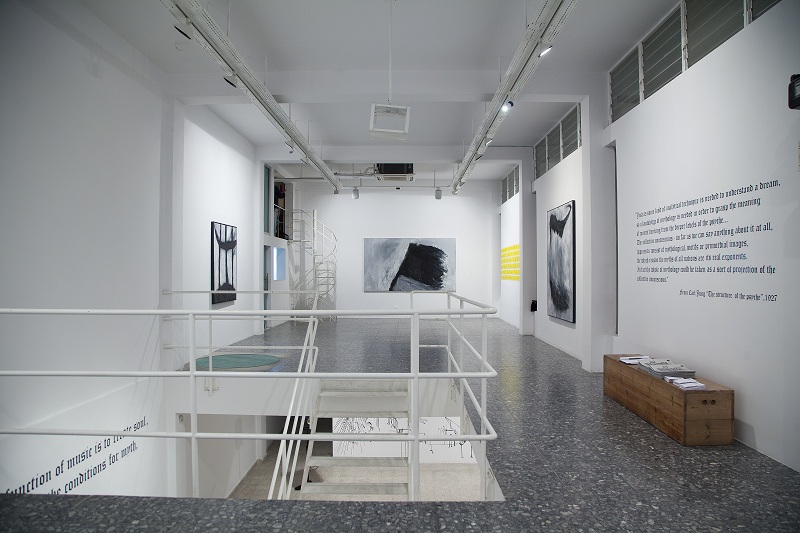 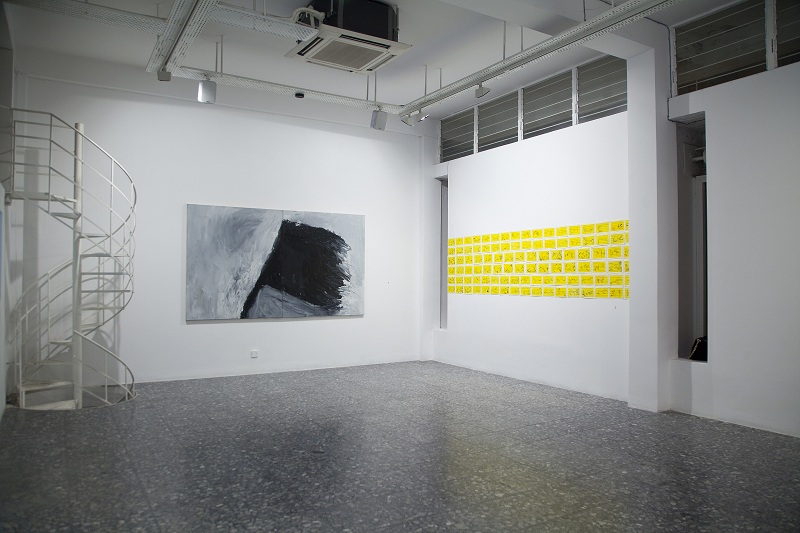 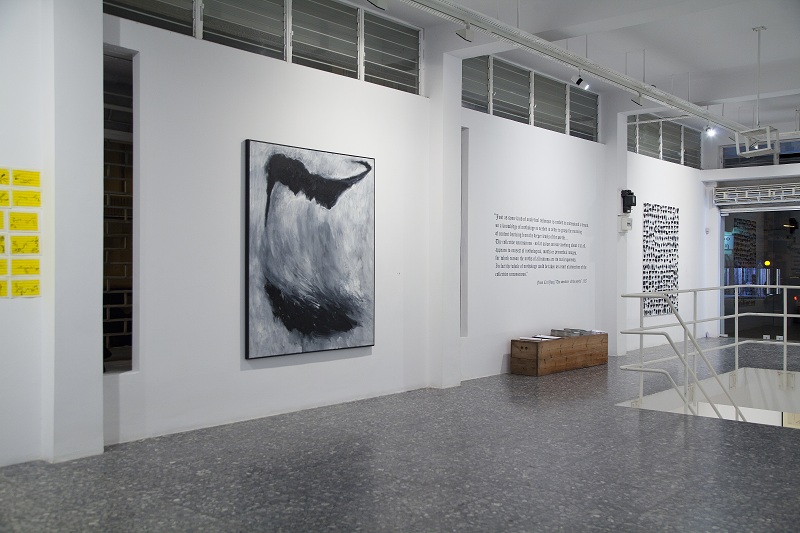 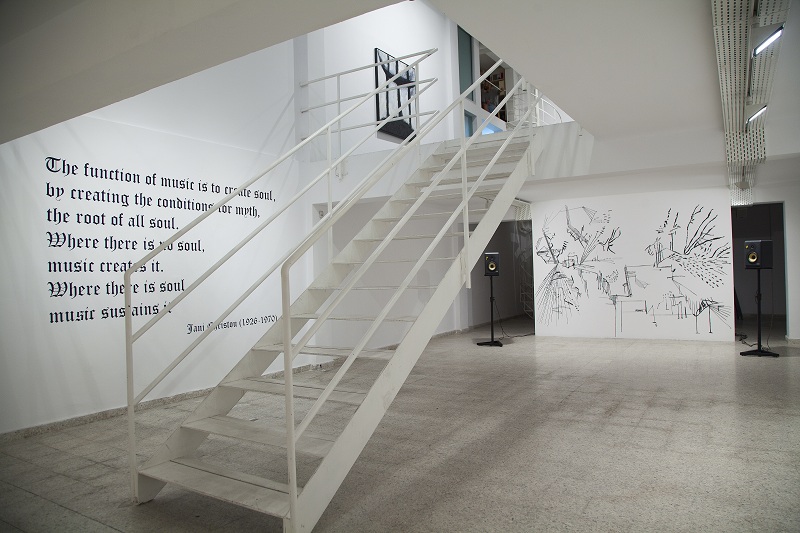 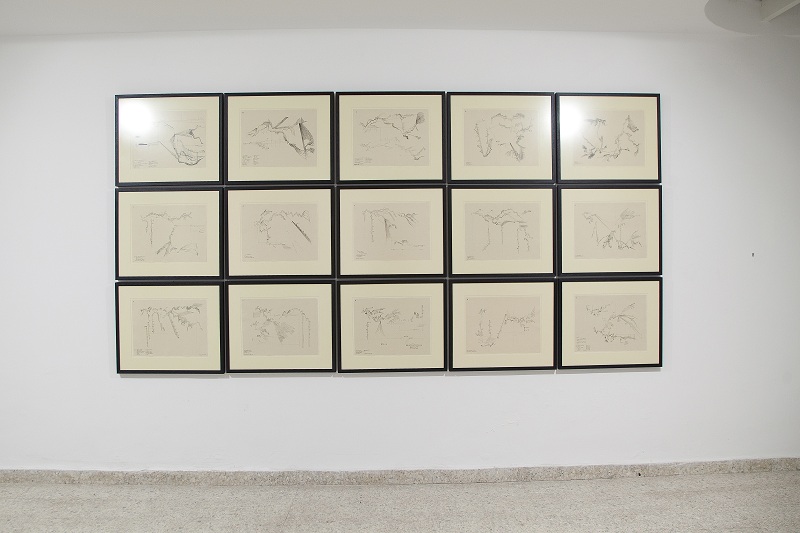 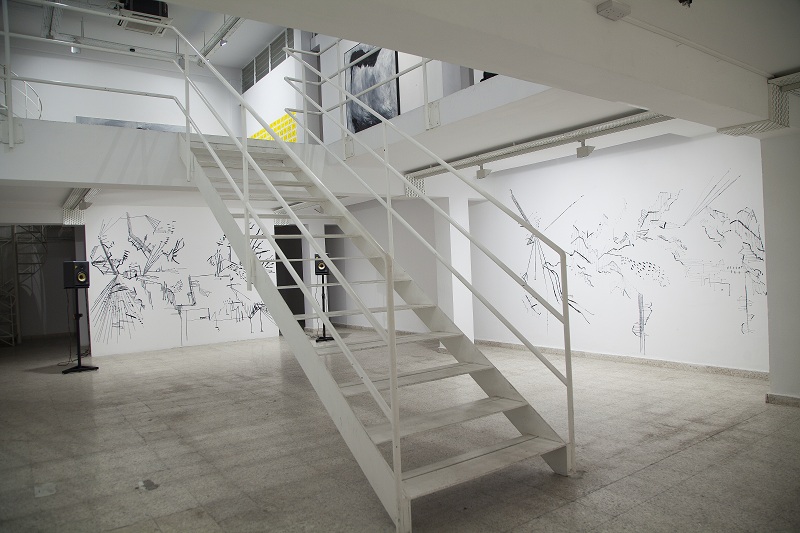 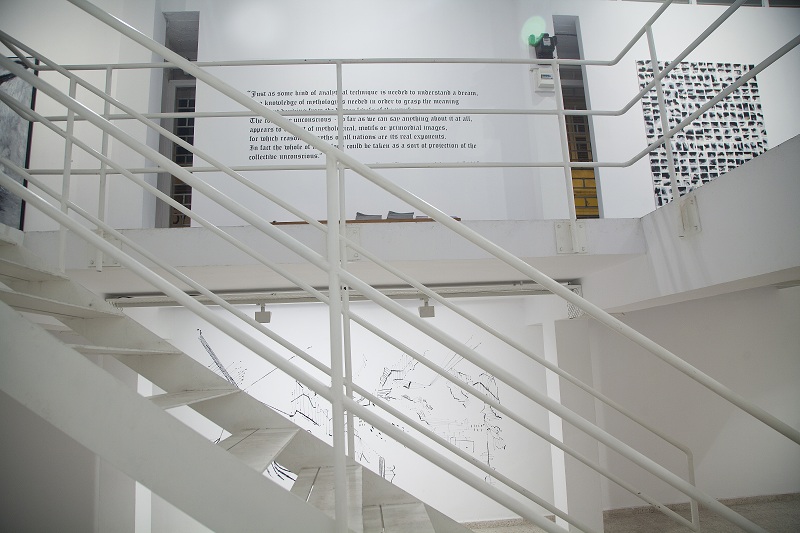 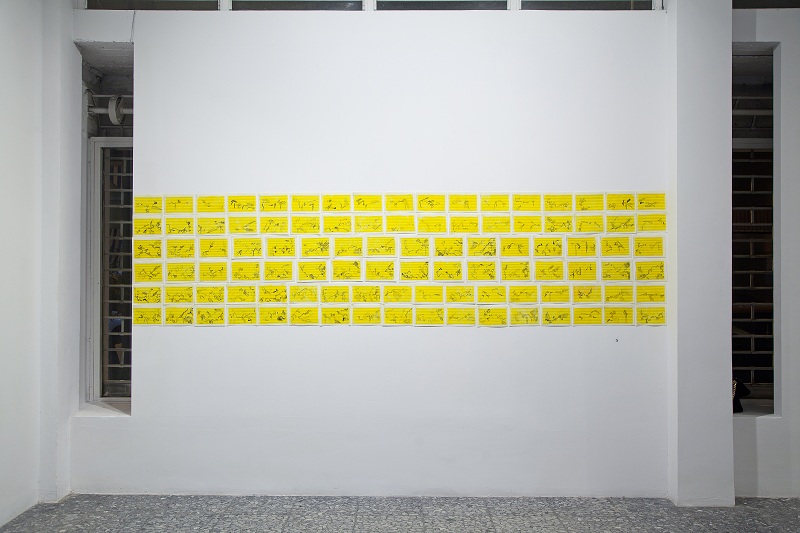 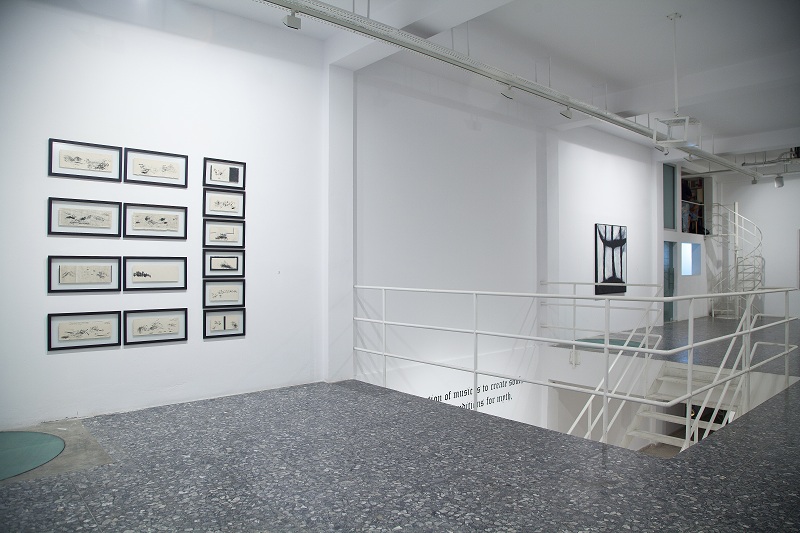